Winter was when we had three months of glorious freedom. Going down day (for everyone who lived on the plains) was at the end of November. The air was beginning to get crisp. But first, blue books and exams. The only good thing about them was that they signaled liberty. All the boys were busy whittling propellers (even those of us who weren’t going anywhere). These props would be held out of bus and train windows. There was a certain festivity in the air.

Starting in mid-November, on the cusp of winter with its clean, chilly air, you could see the snows–the Himalayas—in pristine clarity. Just being outside was invigorating. It was an idyllic time. Unlike most of the rest of the students we were not going anywhere. We were already home–we were “day scholars” and lived on the “hillside” all year round. We felt a bit gypped about not being able to join one of the groups of students (chaperoned, of course) to various destinations across India. For example there was the Nagpur Party, the Calcutta Party, and so on. We were constantly told what a blast it was and that it wasn‘t called a “party“ for nothing. Train travel in India with its steam engines was an adventure in itself.

What was there to do on the hillside? We played games. We devised ways to make a single game of Monopoly last for days, sometimes up to three days (which lessons have proved useful in life). Aunty Anita would arrange to have a taffy pull. We would all go over to Bothwell Bank and she would have all the ingredients there. We would mix, stir and watch it bubble. Then it was poured out onto wax paper and we had to wait long enough for it to cool until we could pick it up and start pulling it. And then we pulled it for just the right length of time before stringing it out and cutting it up into chunks. No matter how much we made it would be nearly all gone by the time we left. Good stuff.

We read. Hardy Boys was a favorite. Jim Corbett books–all about his man-eating tiger exploits about a hundred miles to our east and a generation previous. Even Nancy Drew, from time to time. And, of course, lots of comics. We found a place in Dehra down past the clock tower that would trade our old ones for other used ones. And then Dad had a huge number of books at the office and the ones we particularly liked to look at were the ones that had all sorts of interesting things one could make. These were books that were already thirty or forty years old but they had all manner of things to interest young boys. We looked longingly at the diagrams, especially anything that had wheels on it and that could be steered. The only problem was we didn’t have a workshop, and we didn’t have any tools. Later, when I took shop in school I also realized I didn’t have one more thing–any ability. The first simple thing I made, a tray with an owl on it, looked like I had used a chainsaw to cut the wood. Mom said she liked it, but asked, “What type of bird is this, Stevie?” 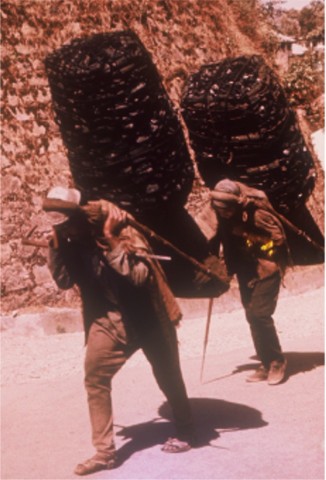 And, as the days grew shorter and colder we would walk to the buz. Just walking through the buz was entertainment. The tourist season was long gone. Things had slowed down considerably. Men would be perched on the stoops of their dukans (stores) with a wool shawl thrown around them and a little homemade angeti warming them. This intrigued us. An angeti is a small iron charcoal stove, but the type the dukandars (store owners) used was really just a tin can with a loop of wire for a handle about two feet long. The can was open on one end and the bottom was punctured with holes. We would place a few pieces of charcoal in this and light it then take the wire handle and swing it in great circle, getting it roaring hot in no time. We would squat and warm our hands but we had to be very careful not to touch the can itself or let it touch our clothing. It is a wonder we didn’t keel over from the carbon monoxide fumes. We weren’t budding pyromaniacs, we were full fledged pyromaniacs and loved playing with fire.

One of the reasons the school let out for three months over winter was because none of the school buildings had heating. There was no such thing as central heating and there was no way anyone could afford it if there was. Easy thing was to just shut it down for the coldest part of the year. 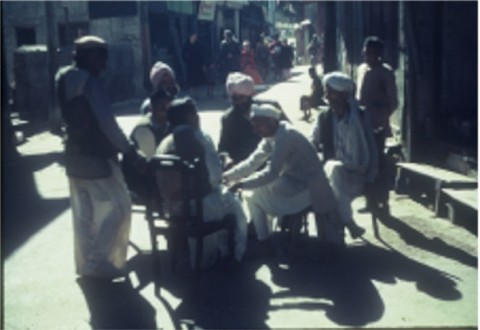 Men in the buz playing cards.

Over the years we had various types of heat in our home. When we lived at Redburn Oaks we had a locally made potbellied stove (made by the tinsmith, Sharma, at the top of Mullingar Hill). We would buy wood, Kumar Singh would chop it up and bring it in. Four pyromaniacs would vie to start and stoke it. We could get that thing glowing red in no time. Temperatures would drop to freezing, which meant that most of the house was about that cold by morning. At night after dinner each of us four boys would place a large squarish rock, the size of a loaf of bread, on top of the stove. Just before heading to bed we would wrap that rock in an old towel and haul it up the stairs. I know it sounds a bit strange, sleeping with a rock, but that thing kept us warm well into the night. 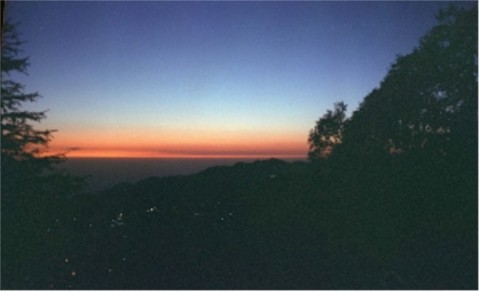 And at dusk I would stand at the fence looking out over the Siwaliks. The winterline stretched across the horizon, a magic magenta. I have since read that the winterline is actually a rather uncommon phenomenon. Given our altitude, the dust and smoke from the plains provided the right mix to catch the setting rays of the sun which resulted in a colorful horizon above the horizon.

Christmas was right around the corner. The first party was always the one at the hospital. Mom worked there and that meant we were all invited. The party was held on the top floor on the west side of the hospital. All the staff, all the doctors, all the nurses and all their families made for quite a bunch. The hospital was a great venue for a party, except for one small thing…the smell. Landour Community Hospital had a cloying smell of a mixture of formaldehyde and pharmaceuticals and a cleaning agent called phenol. But after five minutes you never smelled it, it was only when you first came in.

The program was simple–eat all you could, laugh a lot. And there was always an abundance of food–a full meal, and lots of Indian sweets. The food was diverse because the staff was diverse–Indian (North and South), Anglo Indian, American, Kiwi, Australian and English. The nurses pinched our cheeks (a sign of affection). We would sing a couple of Christmas carols, some in Hindi, some in English. Someone would make a few remarks and we would close in prayer. Almost everything closed in prayer.

It did not snow every year, but most years it snowed some, and some years a lot. And the more it snowed the quieter everything became. The snow absorbed all sound. We would take a walk around the chukkar and all we heard was the skrunch skrunch of our feet compacting the snow. It was not unusual to pass a coolie without shoes just walking through the snow in his bare feet. They could do it because that is all they had ever done. In fact I doubt they could find shoes that would fit because their feet became splayed and calloused from a lifetime of walking barefoot.

I will never forget the Christmas of 1959. 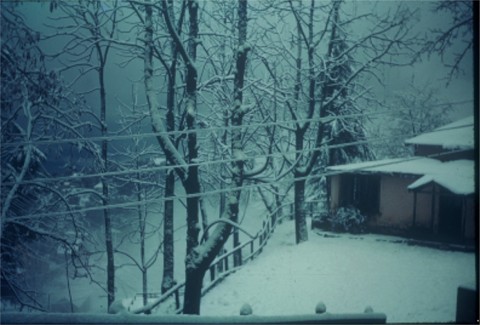 We had already had the hospital party. And a party was planned for all the remaining missionaries on the hillside, which were few. Invitations had gone out. It was a potluck to be held at our house, Redburn Oaks. Chota Lal, our cook was busy preparing the place. Kamar Singh had wood stacked up ready to make a toasty little fire. Mom decorated. Dad threaded a tape on the old Norelco reel-to-reel tape recorder for some Christmas music. Everything was ready.

The night was clear and cold and people started to arrive. The dinner began and everyone was having a wonderful time. I was doing my very best to achieve a sugar high by concentrating on the deserts. It was a bit crowded and the house started to warm up. 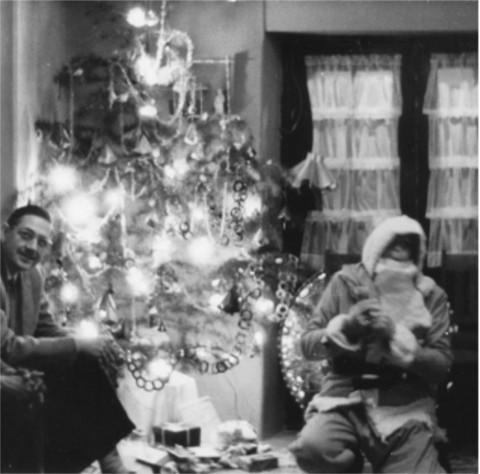 Uncle Zerne with our unexpected guest…

Sometime towards the end of the second hour things were just starting to die down towards a peaceful, contented conclusion when…NO! What on earth? WHO on earth? In came someone, a man, an American or European, in a Santa outfit, Ho Ho Ho-ing his way into the room. Over his shoulder was a sack, a large sack. No, could it be full of…toys? He certainly had everyone’s attention. Especially us kids.

Now you have to understand something. The mission community I grew up in was not overly fond of this Santa stuff. Santa clouded the real issues of Christmas. But here was someone (WHO could it be?) who had gone to the trouble of putting together a passable Santa outfit, complete with paunch and considerable cotton wool plastered all over his face. In fact, there was so much covering his face we couldn’t tell who it was.

To the delight of the kids and the increasing puzzlement of the adults, Santa started passing out presents to each of the kids. HO HO HO, was all he ever said. No trace of an accent there. And absolutely no clue as to whom he was. And when he was done, Ho Ho Ho, off he went and out the door and down the hill.

Actually, this fellow, whoever he was, almost ruined the party. For the next twenty minutes all the adults tried to figure out who it was. Who cares! we kids thought. But now …could it be Paul Schoonmaker? No, too tall, besides the Schoonmakers had left on a trip. Could it be… first one name. Then another. No, no. None of them. And there were just a very finite number of people who it could be. 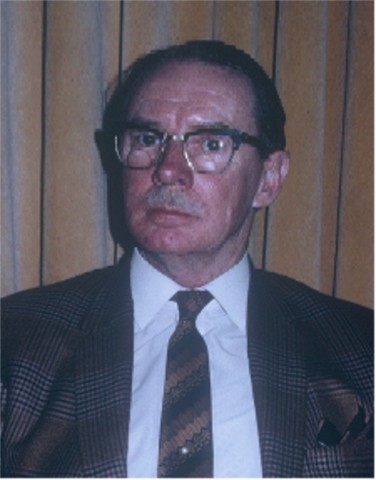 Mr. Norrish gave us one of the most memorable Christmases ever.

And then it slowly dawned on the group, silent now. It had to be Alan Norrish. It could not have been anyone else. Colonel Norrish, really. Fifteen years earlier he was the commanding officer in charge of Singapore when it came back into the hands of the Allies. Now a British missionary, who, as it happened, lived at Edgehill, just down the hillside from us.

Silence turned to mortification as the party planners realized they had somehow, inadvertently forgotten to invite him and his family. And Mr. Norrish, with a twinkle in his eye, turned the party into a very memorable occasion.

It was perfect. It was Christmas. Had not God invited Himself to mankind’s little party?