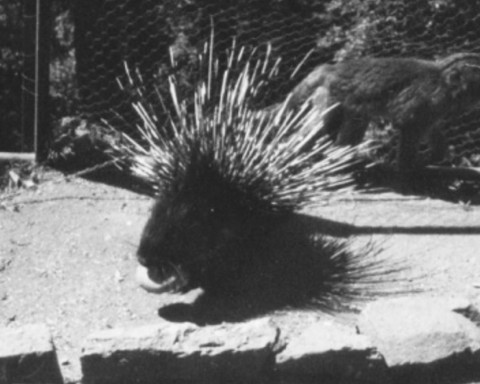 The further along we got in high school, the more often we would be allowed to have a class or our study hall period outside. It was a privilege directly linked to maturity–a link not always warranted.

One fine spring day, a number of us were allowed to study on the steps outside the Library during Study Hall. We were a small group of 5 or 6. Larry King was there and he was… not reading. And he was not studying. He was fussing over something. Something small.

My curiosity was piqued.

I moved over and sat by Larry. In his cupped hands was a small…what the heck was it? A baby flying squirrel? Nope. A large rat? Nope. I could not figure it out.

“A baby porcupine,” he whispered as I gently took it from him and held it in my hands.  It was the size of a hamster.

It was the cutest thing…in a strange sort of way. Large snout, fine whiskers, no quills but bristly all over.

“Where’d you get it, King?” I asked. Porcupines are nocturnal and shy and I had only seen a couple of them in the wild, but never a baby.

“Dudhwala (milkman). Said he found it coming up from Kanda over by second Jaberkhet. Bought it for three roops (rupees). Had to have it.”

“Keen. You going to raise it? Can you do that at Hostel?” Larry was in boarding.

“Nope, can’t”, said Larry. “I’ve had it three days now and if they find out they will confiscate it.”

“Well, Van Rooy, if you give me three rupees you can have it.”

And on that warm spring day I came into possession of the most unique pet I had ever had. 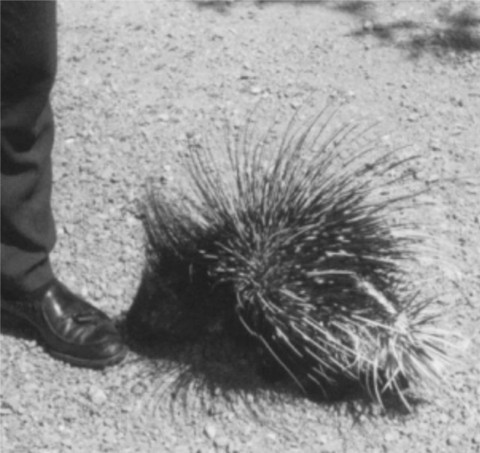 You heard it from someone that owned a pet porcupine; they CAN NOT throw their quills. But they can be real scary when they want to be.

Now we had a number of pets. Dogs (Labs and Alsatians mostly). Cats. And dad loved fish (can fish be pets?). We would stop off at Crawford market in Calcutta on the way back from our vacation on the beach and bring back exotic tropical fish for his aquarium. And sometimes we would catch unique and interesting fish in the streams down in the Doon. Dad spent an inordinate amount of time fiddling with the aquarium, keeping it clean, getting things just right. At least the fish food was cheap.

And then we had, over the years, some other rather interesting pets. Once a fox, which we raised from a kit. When it was old enough we released it and never saw it again. Another time a baby kakar (barking deer), which, despite our efforts and loving ministrations, died a couple weeks after we got it. And downstairs in my room we had a terrarium in which Norman and I kept, at one time, a couple of Himalayan pit vipers Norman caught. Sabitiri, the maid, would not go near them, which was a good thing. But one day mom came down for an inspection and pulled back the curtain on that shelf and peered into the terrarium.

“Yeah, what type of snake…or two?”

“Oh, they are both pit vipers.”

“Out. Gone!” she said, pointing her stubby finger in the general direction of the outside door. And that was the end of them.

And we had had several Rhesus Macaque monkeys over the years. These were very common in our area and very hardy (the other type of monkey we had in the area, langur, was almost impossible to keep alive as a pet. The only person we ever knew succeed with a baby langur was Helga Wolfe, a couple years ahead of me in school). At the time I got the porcupine I also had Koila, a Rhesus monkey.

The Indian porcupine can grow to up to three feet in length, counting the quills at the end of its tail, and weigh thirty pounds. With back quills extended they can appear to be nearly three feet high. The quills themselves can be a good foot long, and certain quills high on the back significantly longer, but also thinner. They tend to arch their backs when in a defensive posture, and do a lot of quill rattling (the hollow quills on the tail when quivering can make quite a racket, designed to frighten). This, along with sharp backward movements accompanied by a lot of huffing and puffing can be very intimidating. Porcupines are nocturnal and found all over India.

This little creature fit easily in the palm of my hand, maybe four to five inches long. It had no quills at this point, just long bristles.

It was the cutest thing.

I became its mother. Initially I nursed it with a bottle. As soon as it could nibble I started feeding it crisp vegetables and potatoes. And took it to bed with me, which was OK at the beginning. It would crawl around my legs which would tickle, and would end up nuzzling up to me as I slept. I left it in a pen outside during the day. This was well and good when it was very small. But it grew rather quickly. And it also began urinating in my bed. This was intolerable because its urine had a very, very strong odor to it.

As I mentioned we also had a pet monkey at the time, named Koila. I had purchased Koila for ten rupees from a coolie. Koila ran free and simply would not obey me, although it would let me groom her and would ride on my shoulder. She was such a nuisance at times that I wished she would hook up with a troop of monkeys passing through the area. On several occasions I took her on walks and try to lose her but she could always find her way back. 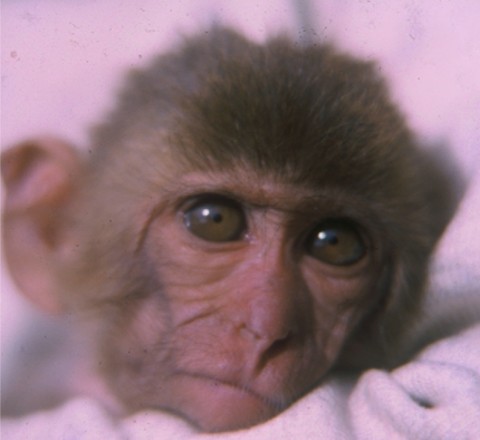 The Mennonite compound was right next door to us. In the spring when the moms would come up and take their kids out of the dorm, we would have seven or eight Mennonite families living there. Koila would go over and see if anyone would give her anything to eat—she had an insatiable appetite. And sometimes she was opportunistic. Most of the doors had screens doors and on fair days it was nice to have the door open, but the screen door shut to keep out the flies. They kept out the flies but they did not keep out Koila.

One day Koila eased open the screen door and let herself into the Claassens’ place, which happened to be the residence closest to us. Mrs. Claassen was busily working away in her kitchen, baking something from scratch. The Mennonites always made things from scratch. With an eye on her and an eye on the door, Koila began helping herself to the fruit on the table, eating as much as she could as quickly as she could, her little cheeks distended until they would not hold any more. She had her hand inside the jam jar when Mrs. Claassen turned around. Mrs. Claassen shrieked. Koila made a beeline for the door, somewhat impeded due to the banana she was trying to take with her, Mrs. Claassen hard on her heels with a broom.

Mrs. Claassen stood on the porch making some very un-Mennonite remarks on what she would do to that little rascal if she caught it in the house again. And all this time I thought Mennonites were pacifists.

I would put Koila in a fairly confined space at night inside our house at Chenowyth—a cupboard at ground level. So, as an experiment I tried putting the porcupine in with Koila at night. It worked wonderfully and they developed a real affection for each other. But in a month or two I would occasionally hear Koila chattering away in the middle of the night scolding the porcupine. When these became more frequent I had to figure out something else to keep the porcupine from stabbing my monkey to death. 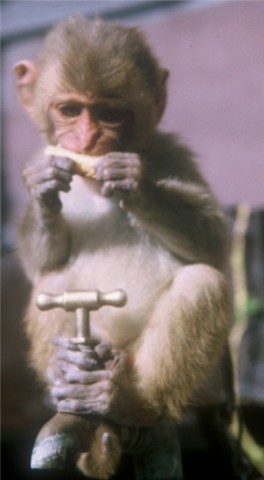 Just on the other side of our fence at the top of the khud (the hillside) was a small, semi-flat area about three or four feet across and about ten feet long. I dug this out and put chicken wire all around it. This worked well. The porcupine dug a little hole into the bank and that is where it remained most of the time during the day. When I brought out a potato or carrot, out it would come from its den. It never occurred to me he would ever want to leave.

Occasionally we would let the porcupine out. It had grown rapidly. The soft bristles rapidly became quills. It would rattle and huff and puff at the dogs, which seemed mighty intrigued with this beast. Very early on the porcupine found it could ward off any unwanted attention from the dogs– Laddie, Triksy (Santu’s dog, the chowkidar at Ellengown), and the Seefeldts Lhasa Apso, Milo.

Pretty soon I started noticing that even though the porcupine was there when I came out in the morning, it was clear it was not spending the night there. They have front paws that can dig and dig well. So I fortified the fence. Dug it down and embedded it in the earth a foot of so. It made no difference. By October the porcupine was out and about at night. But always came back.

I would sit on the pushta and hold this wonderful creature in my lap. Like a cat, it loved to be skritched under its chin and around the ears. There is nothing quite like cuddling a porcupine.

Spring came. It was pretty much an adult by now and it began spending more time away, several days at a time. But it would come back. I fed it less and less. It was finding its own food. 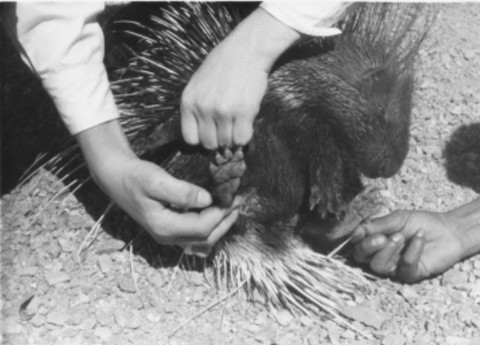 And then one day he came back…but barely. He was limping badly. He had a large gash on his shoulder. Bruised and battered. We surmised that since he was not too shy of humans he had let someone, perhaps a coolie get close enough to clobber him (they are edible). Mom, ever the willing parent, brought suture material from the hospital and some antiseptic ointment and sewed him up. He stayed put for about month during which time the wounds healed.

Then out again. He began returning to the pen and his den less frequently. And then, finally…not at all.

I discovered I had loved, and lost, a most unusual friend.