Music was big at Woodstock.

There was orchestra. Choir. Band. Madrigals. And then, of course, you could take lessons–piano, tuba, whatever.

I started with piano lessons. That didn’t work so well. At about age seven I was sent over to Dhalia Bank were a couple of spinster Anglo-Indian sisters lived. One of them, Miss Dugan, pleasant and getting old, tried to teach me piano. The operative term here is “tried”. My lasting memory is staring at folds of skin at her ankle that drooped over her shoes as I tried to work the foot pedals.   But I still recall the tune of “The Volga Boatmen” because I never got much further than that page.

After furlough in ’63 I switched to accordion. One monsoon one of the bass keys got stuck. This was no big deal. During the monsoons everything got stuck. Anything that could swell, swelled in the high humidity. Or grew mold. I took out my Boy Scout knife to unscrew the back to fix it. I fixed it all right. As I gently separated the part that held all those buttons in place it suddenly slipped and the whole thing came apart–the buttons went everywhere. And all the king’s horses and all the king’s men could never put that thing back together again. 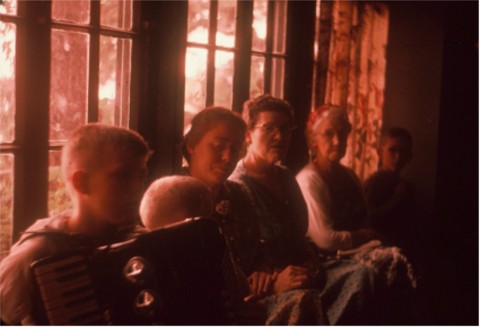 That is me on the left in 1964 when my accordian was still working. Third from left is Miss Stoner, who had been my fifth grade teacher, looking suitably unimpressed (as she had every right to be), then Aunty Nellann, and then my Grandma Van Rooy, her first and only trip to visit us. This is the only photograph I know of that actually proves I played any musical instrument of any sort as a kid.

Several times a year the school orchestra would give a concert. These were always very well attended, given at least two nights. Parker Hall would be packed. There was an air of formality. Everyone dressed nicely.

It was our junior year and it was the fall concert. Parker Hall was filling up and there was a hubbub of conversations. Girls were decked out. A number of the guys had dates and the rest of us wishing we had. The lights flicked on and off in the lobby signaling things were ready to start. The stragglers found places. Quiet, please.

I was sitting with a number of the fellows in the back under the balcony. This was an event. The first half of the concert went magnificently. Well done. Then came intermission. We could grab a coke, maybe some chips or popcorn. When the lights flickered, back in we went. The Orchestra would already be in place, everyone tuning up. First violin walked to his seat–Kenny Blickenstaff. Then came the conductor, Mr. Flora. Tap tap tap. Silence, everyone poised. Then off they went.

Several pieces into the second half of the concert, they began a piece called “Russian Sailor’s Dance”. This particular piece not only got louder and louder, it also got faster and faster.

Peanut (Steve Wilkins) was never accused of being too refined.  Most of us were at least halfway conscientious not to be overtly crude in public. And on this occasion Peanut was being very conscientious. Unfortunately, his timing was off.

When the orchestra hit the frenetic crescendo of this piece the music score said “grand pause” and abruptly the music stopped. And it was at this ill chosen moment that Peanut erupted with a long, loud “bbbrruuuuuummmp”–a flatulence that carried to every corner of Parker Hall. How was he to know they were going to stop?

It was a moment frozen in time. The frenetic activity of the orchestra ceased. Every bow held poised for the signal of the conductor. Total silence. And then, from the back of the hall a sustained trumpeting.

Peanut slumped in his seat, mortified. Those of us in the vicinity were incredulous. Such a thing had never happened in our living memory. A magnum opus like this? Unheard of!

The conductor’s hand fell. The orchestra struck up again. And as it did the first stifled giggle was heard. And then a chuckle there. Then laughter. And on stage Ralph Mason, cello and all, was beginning to shake–and it was not vibrato. The shaking caused the peg at the bottom of his cello to slip on the floor, and the whole cello slid out and away from him. He grabbed it and pulled it back. Blickenstaff played on gallantly, his generally serious face smiling broadly. Others in the orchestra were finding it hard to control themselves, finally giving into laughter.

When the concert was over the orchestra received a rousing round of applause.