It is a wonder we did not blow ourselves up.

We started with a slingshot, which we called a “catty” (short for catapult) and developed sufficient proficiency to be able to go out and bring down a half dozen birds in a morning (which made an excellent lunch when plucked and fried on an outdoor fire behind the house). Next in the chain to bigger and better weapons was a pellet gun. The first one we got was a Sheriden. This is an American made gun that uses a pellet size just between the .177 and .22 pellet, which are common the only two sizes available in India. Which meant we had to buy their special pellet. Which we regularly ran out of and which was not stocked in India, which meant we had to take the 22-size pellet and roll it down until it would fit.

By the time Gordy was in 7th grade he had discovered he could actually kill partridge with a pellet gun. But you had to hit them in the head. He would take Frisky, our little Scottish terrier, down behind Childers and often brought back one for dinner. And we found you could kill a monkey with a well-placed shot. We raised rabbits (for meat–dad’s idea) and the monkeys would come to eat the channa (garbanzo beans) that they had spilled from the cages at the far end of the yard at Red Burn Oaks–perhaps a 20 yard shot from the house.

Later we graduated to .22s and a 12 bore and every now and then would borrow a 30-30 or 30.06 rifle from someone. Besides quite a number of kakar and ghoral, Gordy killed a serow (which looks like a gigantic ghoral) once below the graveyard. And also a baral (blue sheep) up in Kulu.

I suppose our fascination with things that go boom started with fireworks. These were available frequently due to various Indian festivals and they were cheap. Our purveyor of provisions, the Prakash brothers at Sisters Bazaar, figured out very quickly that the Americans would buy all sorts of things that go boom on (and often well before) the 4th of July as well as Indian holidays and he was well stocked. Besides the anemic sparklers, and bottle rockets there were packages of small firecrackers with fuses all linked so you could light one and all of them would go off in sequence. These also came in a bigger size. Then there were single large ones, about 4 inches long and about a half inch in diameter. These really went boom.

There was a two-fold problem with all of these firecrackers in those days. One was the powder. The other, the fuse. Sometimes the thing would not go off at all. It seemed. But it was the wise kid who did not pick it up for several minutes. The fuses were often faulty, either burning too quickly or too slowly and seldom at the rate they were intended. Again, it was the wise kid who lit and got rid of the thing as quickly as possible. Even quick was not quick enough on occasion as the fuse literally went from lit to boom in an instant. On one memorable occasion, I was on the chukkar above Bothwell Bank, lit that sucker, reared back to heave it and zip, BOOM. The thing went off in my hand. My hand was right by my ear. I think it is still ringing. My thumb tingled for weeks.

It was also discovered that with a lit cigarette we could have a timed fuse. You light the cigarette, then stick the fuse in the butt end of an unfiltered cigarette. Set it below a window somewhere and you could be in your bed half a mile away before it went off. The boys at hostel used this to good effect and pulled a couple great pranks at Midlands. When the firecrackers started to go off, the staff there immediately phoned Hostel. The staff at the boy’s dorm then checked each room, kept an eye on the hallways for anyone trying to sneak back….and nothing. The perpetrators were already in bed giggling themselves to sleep.

Mason was pretty bold in all sorts of different ways. I was in the Po (bathroom) one day and he had a string of TP across the top of the booths and had a fairly large cracker tied to the fuse on the other end. He lit one end of the TP and suggested I get back to class real quick. I did. A minute or so later, kawumpf, the thing went off, muffled but distinctive.

And of course we had to try to roll our own, always looking for a bigger bang. This involved taking apart several large patakas (the Hindi term for firecrackers, quaintly onomatopoeic), and amalgamating all the powder into one much larger firecracker. The trick was not in a huge amount of powder, we discovered, it was to make sure the powder you had was wrapped tightly. It was Mason who finally came up with the ultimate big bang…dynamite. This was procured from Smiley the Sikh on Mullingar Hill. Mason would stick a small piece, an inch or so, down an open pipe (for example, like the end of the pipe that used to line the chukkars as a fence). This was stout pipe. It looked like a pretzel when Mason got done with it.

One day Conrad came to school with flecks of gunpowder (actually, firecracker powder) burned into the inside of his right forearm going back all the way to his armpit. What had happened is that he (and several others) had a pipe gun made for them in the bazaar. Strictly illegal, of course. In total violation of school rules and common sense, of course. It was just a two foot piece of one inch pipe with a plug welded in the back, a small hole drilled in the side, and two short pieces welded onto the pipe, one at the end, the other half way down to grip the thing. You put a firecracker fuse in the hole. Put in powder. A wad. And shot (gravel or whatever). You light the fuse, point the thing, and hold on for dear life. Worked great…for a while. Then the back blew off and Conrad was lucky all he got was burned. And that was about the last of that.

I got the itch to make muzzleloader when I was a senior. This was a partially insane idea. Gun control in India was strict and restrictive. And you darn sure aren’t supposed to make a gun. But I went to Dehra, finagled a lock and hammer mechanism from Himalayan Arms, the gun place about a quarter mile from the clock tower. Then I had one machine shop make me a tapered barrel. It was about 14” long, and tapered. The owner looked at me quizzically and asked me just what this was for. He had a pretty good idea. My explanation sadly lacked creativity, but he didn’t say anything. I took the solid barrel to a second machine shop to have it drilled out. He also deduced what this thing was for. Then another shops to drill a little hole in the side. The nipple fit in perfectly into this hole and was welded into place in by Kishen, our mechanic—who knew precisely what this was as we withheld nothing from him.

I then took these components to Sharma, the mistry (craftsman) at the top of Mullingar. He made anything of metal, a bit like Khalik a bit further down the hill. I showed him what I had–the pieces. Squatting, he picked up the pieces out of my knapsack. He then got up, and conspiratorially shut the door. What did he want him to do? Well, I needed a stock and I needed the parts assembled. Looking at me over his round glasses with a sly smile, he said he would do it. He would make the handle for this little pistol and put the hammer mechanism in it, figure out the trigger and put it all together. And he did. And did it well. He knew a little about guns. Although not a gunsmith, he had helped dudhwalahs (milkmen) fix their old muzzleloaders.

The thing worked like a charm. The powder I used was the gunpowder we learned to make. One winter dad took us to Tanakpur (on the western border of Nepal) to visit some old friends, the Strongs, missionaries who ran an agricultural mission. They had a farm, and they had a son our age. Jay was a hunter extraordinaire. He had 4-5 guns of various sorts and vintages and took us boar hunting one night. We never saw a boar, but we buzzed through considerable territory in that part of the Terai on foot without benefit of flashlight or moonlight. Jay was so familiar with this area he knew every track. We could hardly see a thing and here he was leading us through the pitch-black jungle. We got back late, late. But boy were we impressed with his ability to see in the dark. 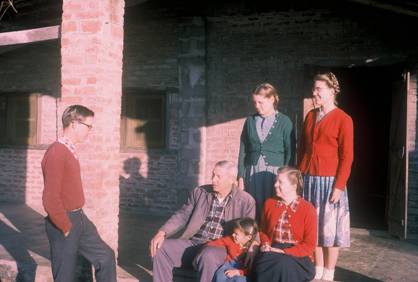 The Strongs ran a farm in Tanakpur. Jay (on the far left) taught us to make gunpowder.

Jay was home-schooled there at the farm. In some respects the extraordinary freedom he had was enviable. One of the things he did was teach us how to make gunpowder with ingredients you can get at your local pharmacy right off the shelf—sulphur, saltpeter, and charcoal. And how to reload our shotgun shells (right down to taking caps apart, and using them to reload our primers). We even learned how to reload .22 shells.

And so it was Jay’s gunpowder concoction that I used in the little muzzle-loading pistol. After the thrill of the conspiracy of getting it made and assembling the parts, and shooting it some, the thought of getting caught and getting into serious doo doo overcame any notions to use it much. Not even my folks knew of it until much later. Because it was not licensed I could not sell it for much and ended up practically giving it away before I left India.

Not long ago I was with my family at a local fireworks display on the 4th. Big bangs, way up in the sky. Sophisticated patterns. Lots of color. But awfully sterile I thought. No smelling the powder. No ringing ears. No lighting a large firecracker with a stick of incense and heaving it as quickly as possible. No fun at all.